For a European it can be said that overall prices are very cheap in Marrakech. The travel budget will be devoted mainly to flight and hotel expenses, any city in Morroco is much less cheaper than visiting European cities.

Sample prices
Here are some examples of prices of Marrakech so that you can make your budget:

Tips
Normally leave between 10 and 15% tip in restaurants. In taxis if the driver has fulfilled the meter and the legality, it is not more than 10% leave a tip.

Haggling
As in all Arab countries, haggling is part of the culture of the people of Marrakech. Except in restaurants, you will have to haggle (willingly or not) in each store and position of the city, especially in the souk. 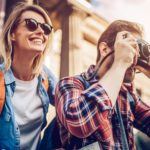